There are plenty of guides about apt pinning, but no one really explains the motivation to do so. It took me some time to understand that, so I thought I’d write it down.

The mainstream method of downloading and installing packages from a repository is via APT (Advanced Packaging Tool). When using apt, the administrator usually says which package he wants installed, but apt needs a bit more information:
Which source?
The same package may be available from multiple sources. For example, my development server is set up to have 3 repositories, all containing some version of python:

Unless told manually which repository to install from, apt has to choose one by itself.
Which version?
When maintaining a server farm, it’s important to remember two things:

In short, apt should choose a version that is new, but not too new.

To solve this issue, apt assigns each package option (name+version+source) a priority number. When installing a package, the command usually looks something like:

Apt-get then collects all of the possible options, sorts them by descending priority (highest priority to lowest) and then by descending version. It chooses the top option and installs that. The administrator can manipulate the options’ priorities, causing apt to prefer the “right” version.
For example, I pinned my puppet agent package to a specific version.
When executing:

We can see the pinning: 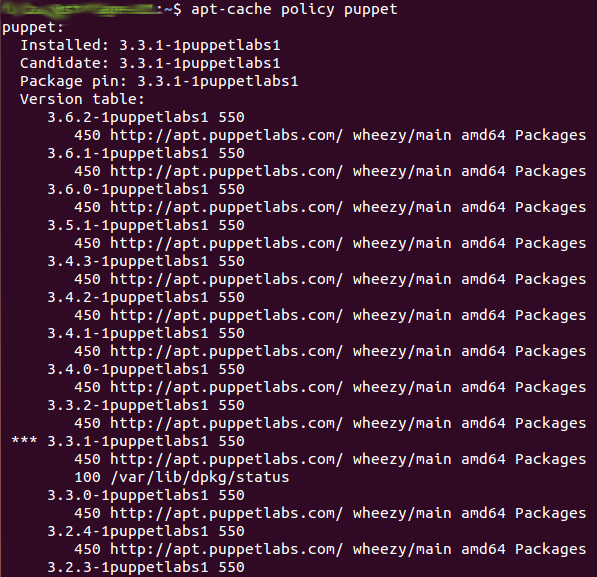 For Debian / Ubuntu, all of the sources have the same priority - 500. Usually, apt only encounters one option available of every package, so there is no collision. When installing / upgrading packages, apt chooses the latest version released by the official repository - the best package to install.

Pinning causes apt to change its default behaviour, so if you’re doing it - you better have a reason. Incorrect pinning can cause:

See my other post about pinning for guidelines about what to pin and how.