In my previous post about pinning I talked about the reasons to configure apt pinning.
This post details my logic about what and how to pin.

How pinning is done

The best way to pin stuff is to add files in /etc/apt/preferences.d/
Those files are parsed whenever the package cache is updated (e.g. apt-get update), and rules inside the files are applied to the packages.
You can view the official documentation about pinning using:

What can you pin

There is no “right way” to pin packages (only wrong ones).
Pinning is supposed to reflect the administrator’s opinion of “which version of the package is best”, so think of what rules you’d follow if you installed all packages by hand, and try and see how you can explain that to apt.
These are some strategies I thought of.

The default behaviour is preferring the latest version available. When installing packages only from the stable Debian repositories, this is a good idea since the only updates are critical bug and security fixes.
It also saves you the trouble of keeping the package version locked (and needing to update the lock later).

Some software repositories offer several versions of the same package, and let you choose which version to install.
Pinning the package to a specific version will tell apt to prefer that version if available.
Note: You might encounter dependency issues (see “version pinning and dependencies” for the problem and possible solutions).

Like to the previous example, you may want to hold apt to a specific major/minor version (e.g. puppet 3.1), but have it upgrade to the highest build/revision (to allow bug/security updates that don’t modify behaviour). To do so, pin the package to a globbed version, like 3.1.*

Some packages aren’t available in your official distribution’s repository, but are available on other repositories.
For instance, HAProxy isn’t available on the Debian stable repo, but is available on the Debian backports repo. If we just add the backports repository, apt will upgrade everything to the backports version (since every package option there has the same priority and a higher version number).
If we instead add the repo and pin it to a lower priority, apt will only take from it packages it can’t find anywhere else.

Similar to the last example, you could have a company repo with packages compiled especially for you - passing additional security audits, containing critical features, etc. You want apt to prefer package options in that repo over “normal” options, even if their version number is lower. To do so, pin the repository to a higher priority than the default. Remember that you have to keep this repository up to date, because apt will avoid applying upgrades found in the “normal” repositories.

Other points to consider

These aren’t pinning strategies, but rather tips I picked up along they way.

Which priority numbers do I choose?

The examples don’t contain actual priority numbers, since these are very delicate.
Priority numbers do more than tell apt which option to prefer

So choose your numbers carefully - if you don’t want apt to change its behaviour, stick to numbers around 500 (the default value).

When installing package dependencies (packages that are required for the one you requested), to packages pinned by version, apt might behave strangely:

In this situation, apt is in a pickle - it can’t satisfy the dependency requirement by installing the highest-priority option.
Different apt front-ends treat this dilemma differently:

The solution to this issue is to study the failed dependencies, and pin them in the same way. Use aptitude’s interactive UI to check for the dependencies of your package, and find the ones with version constraints (=X.YY.ZZZZ). Those are the ones you’ll need to pin. 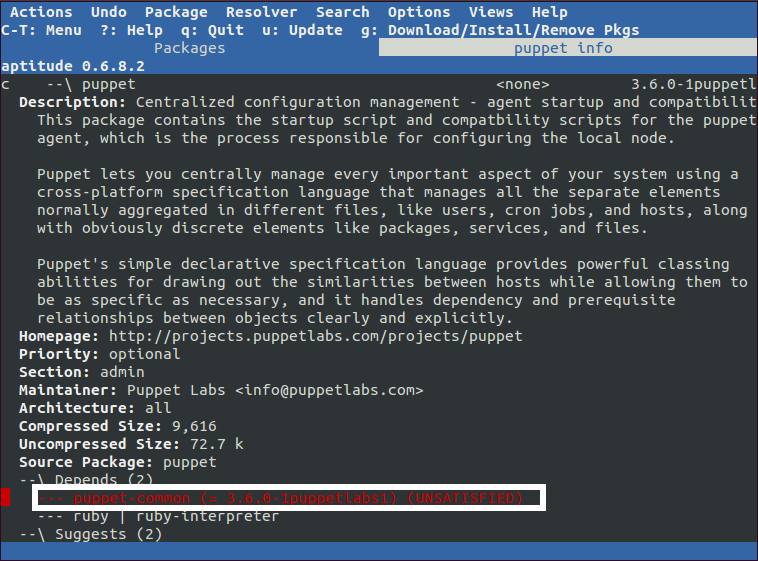