Some time ago, we’ve come to the conclusion that the computer accounts in the domain are disorganized. After doing the tedious job of sorting existing accounts, we saw that new computer accounts are still being added to the “Computers” container, and we had no idea which computer was behind them (server/workstation, test/production etc.). After doing some research, we managed to block everyone from joining computers to the domain without pre-creating a computer account (inside organized OUs).

A little about “Add workstations to domain”:

Microsoft intends for users to join their own workstations to the domain, probably to reduce load on helpdesks. For this to work, DCs have a User Right Assignment called “Add workstations to domain”.
By default, Authenticated users are members of this group, meaning that all domain users can use this privilege. 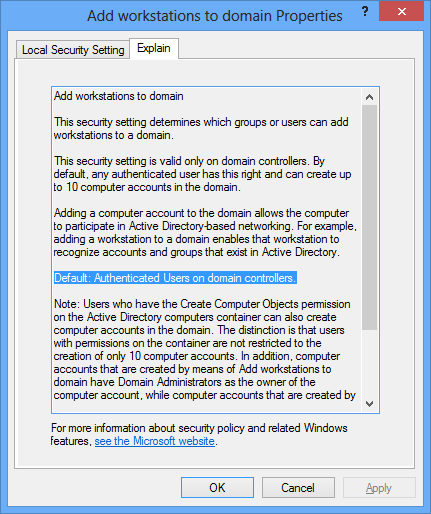 Users with this privilege can create up to 10 (by default) computer accounts in the default computers container.
The limit of accounts every user can create is defined in the domain object, under the property ms-DS-MachineAccountQuota. To view it, execute

The amount of computers a user has already joined is determined by counting the machines with ms-DS-CreatorSID identical to the user’s SID. To find all computers added to the domain using this privilege, you can try

To find computers added to the domain using this privilege by a specific user, execute:

To get a summary of all privilege-added computers and the users that added them, try:

By the way, when using this privilege to create an account, the account is created with “Domain Admins” as its owner (and not the creating user), and the user’s SID in the ms-DS-CreatorSID property.

Note: While these actions should work as planned and prevent users from adding computers without having a computer account ready, step 1 will break DC demotion. You can either redirect your default computer directory to another OU for the process (see KB324949) or restore the original permissions. Since demoting isn’t a daily action, I still think this procedure is worth doing.

In order to prevent users from joining computers to the domain without pre-creating a computer account, you have to perform these actions:

As long as you don’t perform those two steps, users will still be able to add computers to the domain.