After posting my script in the Jenkins mailing list, I was told about a simpler way for implmenting my authorization strategy. I’m leaving this post because the things I learnt from developing the plugin are still valuable and may help someone someday.

We’ll be using the “Matrix-based security” strategy, and give the group “authenticated” administrative permissions.

Go to “Configure Global Security” under “Manage Jenkins” and do like this:

This is what I actually use:

I was tasked with automating and securing our Jenkins CI server.
I found the Jenkins cookbook very helpful, and used a little groovy (less-anal Java) script found in the repo’s README.md to set the following security policy:

However, I was not happy

As I could have seen from the explanation attached to “Logged-in users can do anything”:

Browsing the source code for Jenkins, I found the problem.
Under the constructor for FullControlOnceLoggedInAuthorizationStrategy, there is a line giving anonymous users “read”:

Said authorization strategy offers no configuration, so I can’t tell it not to give anonymous any priviileges at all. 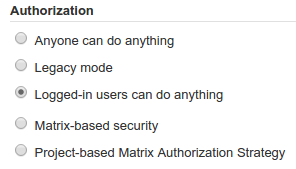 I tried using the script console to set the authorization strategy to the AuthorizationStrategy class, so I can customize it later.
Unfortunately, it’s an abstract class, so it can’t be done.

I used a groovy script to generate my own strategy class, copying the original FullControlOnceLoggedInAuthorizationStrategy class and removing the annoying line:

And then instanciating and setting as my authorization strategy. This worked beautifully, until I restarted the service. Since the class only existed in memory, Jenkins couldn’t re-instantiate its auth strategy, and refused to do anything until I manually fixed it using the config file ($JENKINS_HOME/config.xml)

Eventually, I wrote a Jenkins Plugin that mimicked the original strategy without said line. The process is composed of these stages, which I found non-trivial (as a mere Java junior), so I wanted to detail them:

My plugin works (removed), and all anonymous users are recirected to a BitBucket login page

I set it from the (almost) identical groovy script:

By the way, I’m not afraid of idempotence issues, since the objects modified by this code have no state (so while not ideal, I don’t care about them being recreated over and over).