Our dev team is currently using a Snowflake-like ID generation scheme that looks like this: 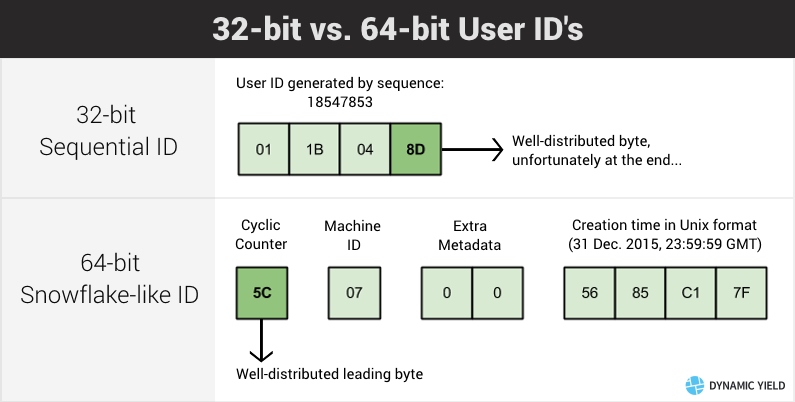 (Diagram by Elad Rosenhim, architect and companion at Dynamic Yield. See his post about distributed keys and how to survive managing an HBase cluster)

Those familiar with MongoDB might notice this structure is very similar to MongoDB’s ObjectId.

This ID generator has several advantages over sequential generation, mainly:

The problematic bit for me is the need to assign a unique ID for every machine (to avoid machines creating duplicate keys).
As you can see from the diagram, I have 2 bytes allocated for this, which might seem like a lot (255 different machines), but this is not enough space to just put unique machine identifiers I already have (like FQDN, SSH fingerprint, EC2 instance ID).
I therefore needed to tell Chef to pick a machine ID that no other node has and use that.
Naively one could do something like this in a Chef recipe:

However, several nodes could be running the same code at the same time, and since Chef offers no concurrency control, those nodes could get identical available_ids and choose the same my_id, leading to nodes with duplicate machine IDs, meaning they might create duplicate user IDs.

I initially thoguht about outsourcing the ID generation to a single-threaded HTTP application to eliminate any concurrency issues.
However, this application would have to hold all of the assigned IDs (as opposed to them being stored in the Chef server), and I find stateful applications much harder to maintain (backups, scaling etc).
Eventually, I thought about keeping the code inside a Chef recipe, but rely on an external service to ensure concurrency.
I found the RDLM (Restful Distributed Lock Manager) which is a simple global lock holder, where locks are acquired and released via HTTP requests, which was perfect for me.

To utilize the RDLM in Chef recipes, I built the lock_rdlm cookbook which includes several interesting functions.
The first is LockRDLM::with_lock, which executes a code block as a critical section, using a specified lock name.
One could use it to run a “critical” code section like this:

The second is LockRDLM::assign_identity, which uses with_lock to look for identities of other machines and choose a different one (out of a range) for the current node.
It’s using the with_lock method internally, with the critical section doing the following:

I use it to solve my use unique identity issue like this: